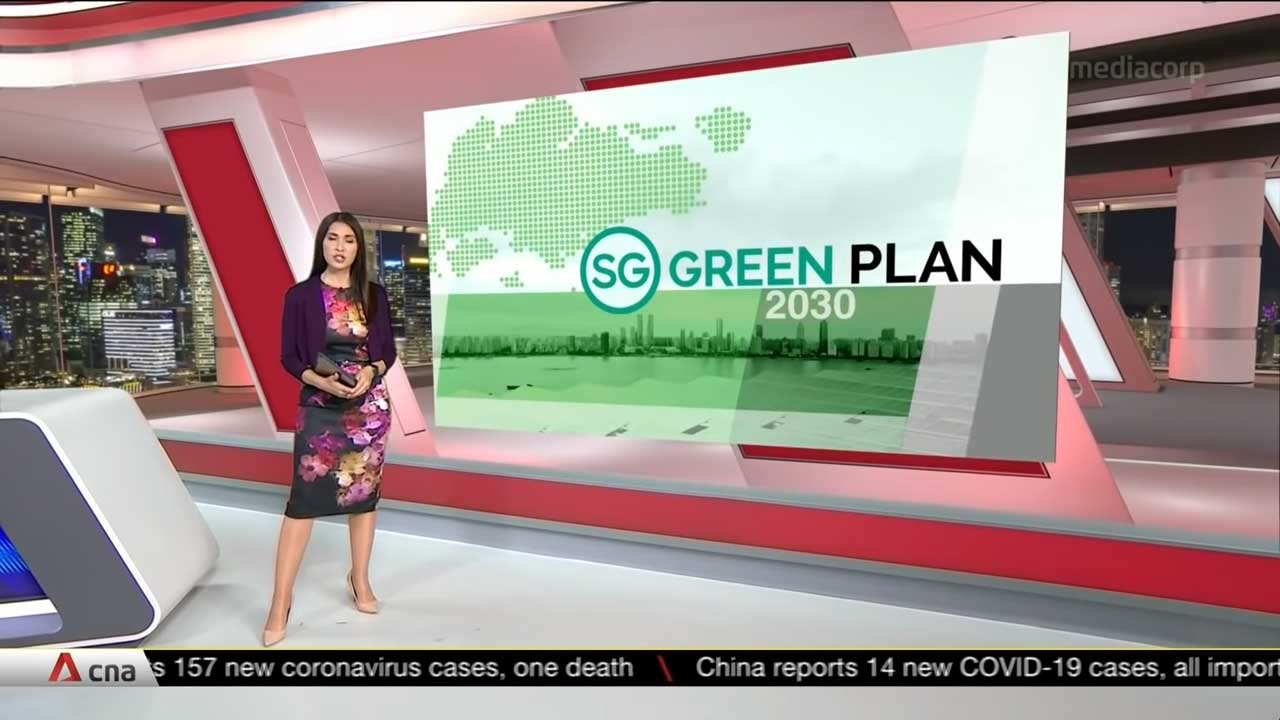 As average temperatures in Singapore are increasing at more than double the rate of other cities around the world, the city-nation is speeding up efforts to become much greener by 2030 .

TV Journalist:  Singapore is speeding up efforts to become a greener nation by 2030 by building infrastructure and capabilities to combat climate change. The country has unveiled what it calls ambitious and concrete goals for sustainable development that cut across areas including transport and waste management.

Let’s start with the drive towards greener transport. A target to install 28,000 electric vehicle charging points by 2030 will be more than doubled to encourage drivers to switch to EVs. Now that’s a huge jump from less than 2,000 charging points currently and with the country  looking to phase out petrol and diesel cars, all new cars registered from 2030 will have to be cleaner energy models.

With Singapore’s only landfill projected to run out of space by 2035 the country also plans to cut down the amount of waste that it sends there by 20%. That’s within five years and a total of 30% by the year 2030.

Schools will also be cutting down two-thirds of their net carbon emissions. By 2030 at least 20% of schools will even be carbon neutral. And to nudge students towards greener habits, a new sustainability program will be rolled out from primary to pre-university levels.

Businesses will also get help to develop capabilities and seize new opportunities in areas like decarbonization and green finance.

Now the aim is to turn Singapore into a regional hub for cleaner solutions by 2030. Jurong island will become a sustainable energy and chemicals park and the country a green tourism destination. To guard against rising sea levels design and implementation plans to protect critical areas such as Jurong island and the stretch between the city and east coast will be drawn up by 2030. The new plan spearheaded by five ministries could help Singapore achieve net zero emissions faster and strengthen its climate commitments under the Paris agreement. A series of dialogues with ministers will kick off this year to seek the public’s views and explore new ideas.  Sustainability and the environment minister Grace Fu says that the government is already testing out solutions as the country heats up.

Grace Fu,  Sustainability and Environment Minister:  Singapore will always be hot and humid, but we don’t want temperatures to be unbearably high. Urban heat is all around us. For example the kind that you feel while standing behind an air conditioner.  We will moderate the rise in urban heat by increasing greenery and piloting the use of cool-paint on building facades.

TV Journalist:  Those we spoke with say the goals in The Green Plan are achievable, but the wider community needs to get involved. Lewis Ng who filed a parliamentary motion aimed at accelerating Singapore’s green efforts just last week says the roadmap makes it clear how Singapore can tackle climate change.

Lewis Ng, Chairperson, GPC for Sustainability and the Environment:  The plan is very extensive and I think very importantly as well, we’re targeting within this decade by 2030. So not very broad, ambitious targets but a very narrow, targeted approach now on how we can mitigate and also adapt to climate change. I think what more can be done outside this Green Plan is really how we can now engage and partner the private sector, the civil society and fellow Singaporeans.

TV Journalist:  But to more than double the number of planned electric vehicle charging stations one analyst says private charging providers may need transitional subsidies to build the infrastructure before EV take-up catches up. He also says the government could help them navigate common issues that crop up during negotiations to build charging points on private property. This could be done for instance by coming up with standard terms of agreement.

Walter Theseira, Assoc Prof, Economics, Singapore University of Social Sciences:  Installation, you know, things like liability issues. What happens if there’s a fire you know, uh, who pays for what, uh you know, um, how do you handle maintenance. I mean there’s going to have to be some familiarity in the market about, uh, about what the standard terms of such contracts or arrangements are so that it becomes easier to install them because if, you know, if every single, uh, property owner insists on an individualized contract for installation, I can see that we’re not going to get anywhere with this.

TV Journalist:  Prime Minister Lee Hsien Loong says the plan builds on efforts from past decades. He adds that even though Singapore is small and lacks natural resources it can still press on with technology and policy solutions for green development. He urged all to work together to make the country a bright green spark for the world. At the same time Deputy Prime Minister Heng Swee Keat says this is the next step in the country’s journey to sustainability which has been a core tenet since independence he says more details will be given in his budget speech next week and hopes The Green Plan will inspire a broader national movement where everyone plays a part. CNA also asked people how they would do their part to make Singapore a greener city.

Person on the street:  I could take more (of a) public transport instead of driving.

Person on the street: As for users of electricity, the television, definitely keep it off if not in use.  I used to use it as a form of background sound whenever I’m doing other chores around the house and I think keeping lights off when you’re not in the room.

Child on the street:  I will use less electricity, turn off light when not in use and use less plastic.

1. Singapore is ________ efforts to become a greener nation by 2030 by building infrastructure and capabilities to combat climate change.

2. The country has unveiled what it calls ambitious and concrete goals for sustainable development that ________ areas including transport and waste management.

4. The new plan ________ by five ministries could help Singapore achieve net zero emissions faster and strengthen its climate commitments under the Paris agreement.