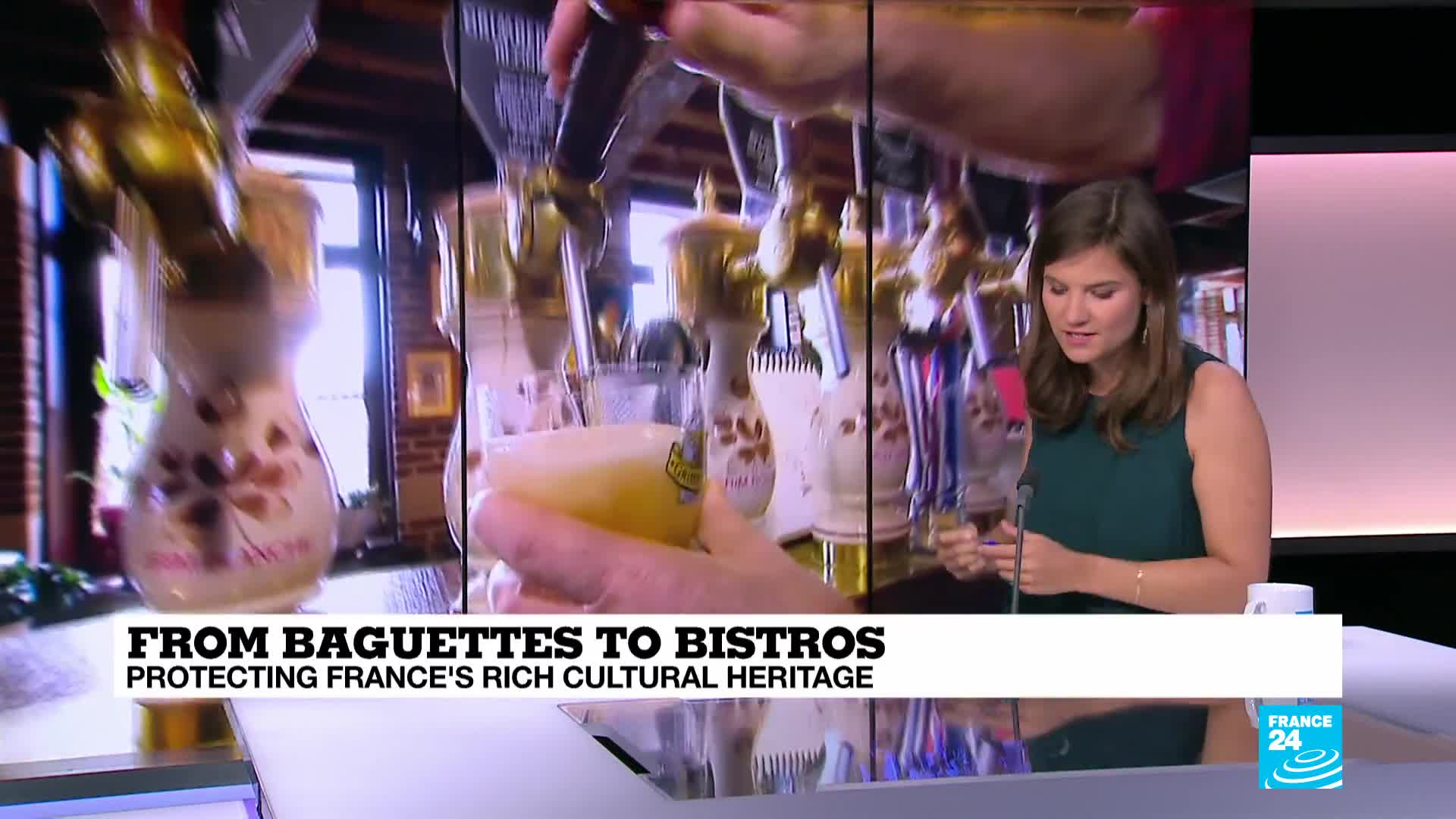 Please Note:  This video is scripted up to the 5:32 minute mark.

TV News Journalist:  It’s time now for “French Connections” our weekly look at the intricacies of life here in France with our very own Florence Villeminot.

TV News Journalist:  Hi Flo.  This week we’re gonna start with a riddle.  What do the baguette, Paris bistros, and bouquinistes, those book sellers on the Seine, have in common?

Villeminot:  Well Ginny they all start with a “B” first of all.

TV News Journalist:  That’s not it.

Villeminot:  That’s not it, though.  Basically there are various groups lobbying for all three of these Bs to be granted the Intangible Cultural Heritage Label from the United Nations Cultural Organization UNESCO which is actually based here in Paris.  Now this title, which is kind of a mouthful, recognizes practices, events and crafts that are not physical sites, but are still a unique part of a country’s cultural heritage.  For instance Belgian beer culture, the Korean way of making kimchee or, more recently, Neopolitan pizza.

Now since it was created in 2008, this label has been given to over 450 entities in the world including fifteen here in France for instance France’s gastronomic meal.  That is something that is part of the intangible cultural heritage.  Now some critics say that it’s a little bit too abstract and symbolic and only promotes tourism and consumption.  But others say it’s actually a very important stamp of approval that helps protect local traditions and practices.

TV News Journalist:  France can only submit one of these dossiers to UNESCO every two years so the competition between the three is very tough.  Let’s focus now on the first one: bakers, the baguette.  Bakers made headlines earlier for pushing the baguette which is of course the most recognizable bread perhaps in the world.

Villeminot:  That’s right.  And you might be surprised that it doesn’t already have the status of this intangible, cultural heritage.  Now, arguably, you can’t get more French than the baguette and for many people it’s the symbol of France so long as it’s done the right way.  Take a listen.

Various French bread consumers and bakers:  It can’t be over-cooked.  Crunchy and dense.  It has to be soft, but not chewy.  It’s the image of France.  The Parisian with the beret, a baguette and a camembert.  People love baguettes.  It’s their favorite bread.  It’s what they order and love the most.  Yeah, she’s very happy.

Villeminot:   And the baguette can be happy because it’s got a lot of support including from President Emmanuel Macron who says the baguette is envied around the whole world and needs to be protected and that’s indeed what bakers want.  They want to protect the quality of the traditional baguette essentially because it’s facing a lot of competition say from big supermarkets and also it’s in trouble because eating habits are changing. People aren’t eating as much bread as they used to.

TV News Journalist:  Now another French favorite is also being threatened by changing eating habits and that’s Paris’s famous bistros and their sidewalk cafés.  Now that might be a staple of Parisian life, but the origin of the word is actually uncertain and hotly debated.

Villeminot:  That’s right and bistro is, in fact, our word du jour.  Now some people say the word comes from a regional word for instance “bistro” or “bistrouille”, but a popular story says that it originated when Russian troops occupied Paris following the Napoleonic wars. Essentially they weren’t allowed to drink on duty and so when they would go to cafés they would speak to waiters in Russian.  They would say “bistro, bistro” which means “quickly”.  Give me my order very quickly.  Now these days bistros are a place where people take their time.  They, you know, can go in for a coffee or a drink with their friends or a delicious meal because in bistros you can eat quite well and it’s not that expensive. It’s a place where life happens essentially.  People fall in love, sometimes they break up and for many people who live in very cramped city apartments it’s actually an extension of their home.

Various Bistro patrons:  For me the bistro is convivial.  It’s like being with your friends in your living room.  It’s a place you can meet people.  You can talk with your neighbor about wine, the weather, whatever.  You communicate.  We talk about the world.  That’s it.  It’s a way of getting out of the house at different times of the day and to get together.  Time stops when you’re at a terrace.  You get out of the rush of the city.  You get together to talk about everyday things.  You escape in a way.

TV News Journalist:  Bistros and sidewalk cafés exist all across France.  Why are the ones in Paris pushing for this status?

Villeminot:  Well those leading the initiative say that bistros are really part of the city’s heart and soul and actually they point to the very central role that bistros and sidewalk cafés played in the wake of the November 2015 terrorist attacks.  Bistros became a symbol of resilience and going to them was actually kind of an act of resistance.  But professionals say that bistros are actually in danger.  The number of bistros in Paris has dropped by 50% in the last 20 years, this due to a rise in rents essentially and also changing eating habits; a lot of people like to go to fast food joints instead.  Now this is an endangered species according to professionals that is really important to save.

Alain Fontaine, Bistro Owner:  Bistros are a space of freedom, equality, everybody can buy an egg for €1.00 or a coffee for €1.20 or a glass of wine for a couple of euros.  It’s a place of fraternity and solidarity because people talk to each other.

Christian Maurel, Bistro Owner:  The clientele is what makes the bistro.  I’m always amazed to see people meet in my bistro.  It’s one of the last places where people interact without judging each other for their social background.

3. There are various groups ________ for the three Bs to be granted the Intangible Cultural Heritage label.