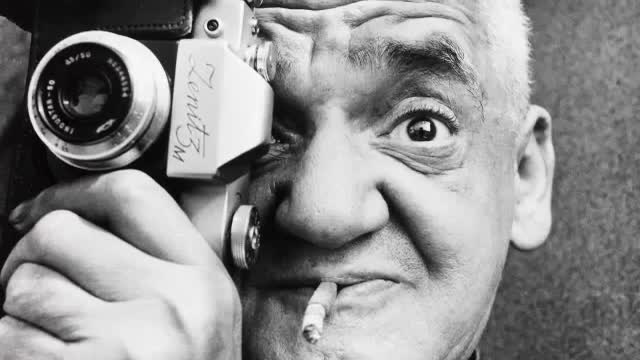 Several photographers and experts discuss the question of whether photography should be considered as art and the necessity of marketing in order to make a living in the field.

Sophie Wright:  What’s a great picture? I guess it’s about either, you know, being lucky enough to find yourself in a location or time where you see something that no one else has captured. Or something the  photographers here talk about quite a lot is a visual signature, so creating work that’s recognizably yours. Art is a rather loaded word with some of our photographers because I don’t think they would consider    themselves artists necessarily. Some of them sit in that camp, others don’t.

Dan McCullin:  There’s a danger, you see, once a photographer thinks he can switch sides and become an artist then you’re in deep trouble. I’ve never to this day ever looked upon myself as anything other than a photographer. I don’t want to be called, you know, an artist. Every photographer in America now is almost… demands to be addressed as an artist. I think it’s kind of nonsense, you know, photography is photography, that is the medium we’ve always, you know, carried the flag under. I’ve stayed in that bracket, and that’s where I want to kind of, you know, go out.

Philippa Wright:  There’s always been the dilemma between “is photography art or an industrial, commercial practice that anybody can do without an  artistic eye if they just follow a set of rules”?

Sophie Wright:  More and more nowadays it’s about being able to market your work, basically. It’s a horrible word to use, but I think it was something that happened, Cartier and Bresson were both brilliant at. The commercial is always going to be an element because it enables the photographers to then, you know, go off and follow their personal work. Magnum was set up to have an archive of images that could be resold and licensed in order for photographers to raise money for their personal projects. So the commercial has fed, you know, the other side of what our photographers care about.

Brian Liddy:  As early as the 1860s photographers were more and more beginning to realize that if they wanted to make a living from their work then they had to protect their work. And so photographers like Julia Margaret  Cameron and Roger Fenton were beginning to patent their photographs and register their photographs with public bodies so that they would be acknowledged as the artist and to stop people using their works without their permission and just making sure that they could control their work and thereby protect their financial interests.

Simon Norfolk:  And this is particularly wonderful about Fenton, commercially he didn’t need the money that he made; he was from a wealthy family. And he didn’t occupy a space like a commercial photographer in that he had a, you know, studio in High Street and was working weekends and holidays and stuff because he wasn’t. He was more of a gentleman traveler. But he certainly radically altered the nature of photography in the sense that by the time he was finished with it, photography was a professional tool.

1. Art is a rather ________ word with some of our photographers because I don’t think they would consider themselves artists necessarily.

2. There’s a danger, you see, once a photographer thinks he can switch sides and become an artist then you’re in deep ________.

4. The commercial side of photography is always going to be an ________ because that’s what enables photographers to pursue their personal work.

5. Magnum was ________ to have an archive of images that could be resold and licensed in order for photographers to raise money for their personal projects.